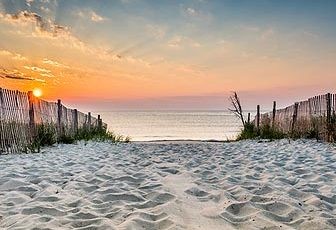 Today we will fly into Norfolk, VA and travel down to Virginia Beach.  Depending on our flight schedule today and on departure, we may spend time exploring.  Then we arrive at our hotel and our beautiful Oceanfront rooms for the next 4 nights.  Relax and unpack knowing you don't have to pack up again until we head home on Tuesday.  Dinner is included this evening.

We will enjoy a full day today following a great breakfast at the hotel.  Just half an hour away from Virginia Beach is Norfolk, VA home to the world’s largest Naval base.  We will be gone all day from our hotel today, as we will be having dinner in Norfolk and then enjoying the Virginia International Tattoo performance.  This is the largest spectacle of music and might in the United States celebrating the traditional calling together of the Scottish clans during times of war.  Our day will begin with tours by land and sea as we visit the Nauticus and Battleship Wisconsin.  Nauticus is the science center and museum known as the National Maritime Center, which features one of the largest battleships in the US - Wisconsin.  We will have a tour of the museum and the battleship.  Following the Nauticus visit we will have a special treat as we have reserved seating for the Parade of Nations. This is where the performers we will be seeing later at the Tattoo will be marching in the parade along the streets of Norfolk.  Following the parade, we will enjoy a cruise around the Naval Base and see these magnificent Naval ships from the sea with a narrated tour.  This afternoon, we will visit The MacArthur Memorial.  This is a museum and research center dedicated to preserving and presenting the story of the life of General of the Army Douglas MacArthur. We will have an early dinner in Norfolk.  Then we are going to be treated to “the largest spectacle of Music and Might in the United States of America.” This is an astounding display of inspirational military music, majestic massed pipes and drums, show stopping drill team maneuvers, colorful and elegant dancers, and much more at the Virginia International Tattoo. Following the performance, we will make the short drive back to our hotel for the night.

Live The Life!  Yesterday was a very busy day, so we can sleep in a little bit, have breakfast and then begin our tour of Virginia Beach.  We explore the place where the Chesapeake Bay meets the Atlantic Ocean.  The vibrant coastal city of Virginia Beach is home to a flourishing local culinary scene, rich history, a variety of arts and entertainment and family-friendly attractions that keeps locals and visitors entertained year-round. It’s true. Virginia Beach is more than just a beach. In fact, there are multiple beautiful beaches and eclectic districts, each with its own distinct personality.  We will visit the Surf and Rescue Museum, which preserves the history of the historic 1903 Life Saving Station including the rescuers who worked there and how they helped create modern Virginia Beach.  The Military Aviation Museum is home to one of the largest private collections of WWI and WWII era military aircraft in the world.  Each plane beautifully restored using original parts whenever possible. We will see the Cape Henry Lighthouse. It was built in 1792, commissioned by George Washington and overseen by Alexander Hamilton. Tonight, we will have dinner included before settling in for the night.

Following breakfast this morning we will drive south out of Virginia Beach and even out of Virginia to the incredible Outer Banks of North Carolina just one hour away.  This is America’s First Beach. In Manteo, we will stroll through the majestic Elizabethan Gardens, which were designed in 1960 as a living memorial to Queen Elizabeth, Sir Walter Raleigh and the members of the Lost Colony of Roanoke.  A highlight of the gardens is an outstanding collection of antique statuary. Then it is on to Fort Raleigh National Historic Site. Located on Roanoke Island.

We will walk around downtown Historic Manteo and explore Roanoke Marshes Light and the George Washington Creef (working) Boat shop: The working boat shop gives us a glance of the Ella View, an authentic shad fishing boat made from native Outer Banks trees.  Bodie Island Lighthouse was completed in 1872: This Lighthouse sits on the north side of Oregon Inlet near the northern border of the Cape Hatteras National Seashore; standing 156 feet tall and equipped with a first-order Fresnel lens, it flashes its 160,000 candlepower beacon 19 miles over the ocean. Jockey’s Ridge State Park is where the tallest natural sand dunes on the East Coast are located. We will learn how these sand dunes shift and move with the wind.  Take a nature walk to the top of the dunes to view the Roanoke Sound.

We will visit the Wright Brothers National Memorial, where Orville and Wilbur Wright broke our bond with the earth in 1903. Listen to an interpretive talk about the first flight from a park ranger, see the reconstructed campsites, view the markers that indicate where the Flyer landed, and walk up the monument itself.  Dinner is included this evening.

Day Five - Tuesday May 3:    Home  (B)
Today, depending on our flight schedules we can relax at the beach before departing for the airport.  What a week at the beach!  Who would have thought there was so much so close to the Atlantic Ocean in one of America's great playgrounds!