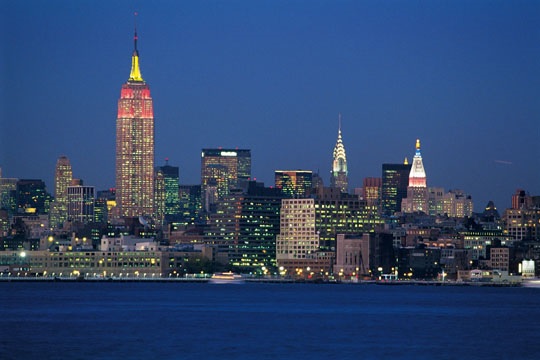 Day Four: Lower Manhattan & Rockettes (D, E)
Our morning begins with a ferry ride around New York harbor that will tour by the Statue of Liberty, where we will view France’s gift of International Friendship to the US. Located on Liberty Island in New York Harbor, the Statue of Liberty is one of the most universal symbols of political freedom and democracy. Here we will get a wonderful up close and personal view of the Lady as she stands in New York Harbor, since 1886. The cruise will continue and go by Ellis Island where over 100 million can trace their immigrant roots to. Between 1892 and 1954, 12 million immigrants entered the United States through this door and began their journey in this brave new world. After arriving back in Manhattan your guide will show you the downtown area including “Ground Zero” and a guided tour of the 9/11 memorial the site of the former World Trade Center. At this 16-acre site, we reflect on this tragic time in our history, which has affected us all and see the magnificence of the new One World Trade Center. As Rudy Giuliani said “you will feel the sacrifice of our patriots and their heroism…Where you will feel the great power and strength and emotion of what it means to be an American.” Then it’s back to your hotel before an early dinner and a great evening at Radio City Music Hall and the Christmas Spectacular featuring the Rockettes.

Day Five: Rockefeller Center and Home (CB)
Rise and shine for an adventure to NBC’s live national broadcast of the Today Show. Wave to your friends and families and bring your signs! Then, just a few short steps away, visit New York’s “newest” attraction – the Top of the Rock in Rockefeller Center. The experience begins as you enter with a thrilling interactive look back in time. You may even try the “beam walk” that simulates the experience of the construction workers that built the observation deck over 70 years ago. Then take the high-speed Summit Shuttle elevators to the recently renovated 70-story-high observation deck, enjoy the open-air 360-degree view through crystal clear glass panels. Then we depart for our trip homeward bound, with the most wonderful memories of New York City, “the Big Apple”, which will stay with us forever.